Pests that Sting: Wasps and Hornets 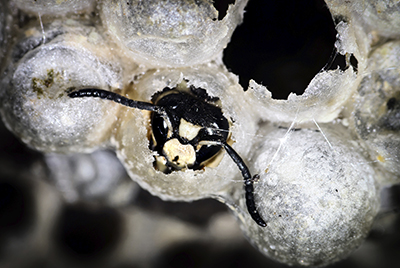 When summer arrives in Maryland, wasp and hornet sightings become commonplace. Although you try to avoid these stinging insects, occasional run-ins are inevitable. 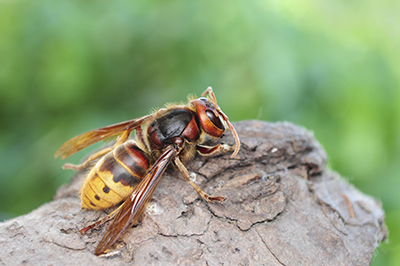 In Maryland, you’ll find only one common type of hornet: the european hornet.  The bald faced hornet is actually a type of paper wasp and is more closely related to a yellow jacket.

The European hornet invaded New York State in 1840. Since those early days, it has spread across most of the eastern United States and into Maryland. You’ll recognize the European Hornet from its resemblance to the yellow jacket, but it is much larger, measuring 1.5 inches in length. These hornets seek old, fallen trees in which to hollow out and construct a nest; on occasion, they invade barns, outbuildings and home wall voids. They have a nasty sting, and will readily defend their nest. European hornets are often a nuisance at night because they are attracted to light and bang into windows.

The bald faced hornet usually builds suspended nests in trees and shrubs. You may encounter a bald faced hornet nest unexpectedly while trimming branches in your yard. These wasps hunt other insects including flies and yellow jackets to feed protein to their young.

Paper wasps construct their paper-like nests on porches, window sills or eves. In the fall months, females will seek shelter in houses or attics.

Yellow jackets can build their nests in the ground (in old rodent dens, under logs), in voids (buildings, between loose debris), and as aerial nests (like bald faced hornets). You may encounter yellow jackets when there is a ready source of food outside, such as garbage cans or picnic lunches. Yellow jackets often make an appearance in search of food, so keep garbage can lids closed tightly and food put away.

Solitary wasps rarely sting humans or cause any serious problems. Unlike social wasps, solitary wasps live their lives singularly. Mud daubers have been known to construct their nests behind and on the siding of a home, but they are rarely a serious problem and do not sting. Cicada killers dig burrows in the ground to place their prey. They have a fearsome appearance but won’t sting unless handled.

Control of Hornets and Wasps

If the nests are in areas that will have little human contact you can leave them alone and they will die out each winter. Seal up cracks and gaps in the foundation or walls of the home to prevent wasps from building nests or seeking winter shelter. You can utilize a shop vacuum to suck up the stray wasps that get into your home. Yellow jacket nests can contain thousands of wasps and are often best left to Eco Care Pest Management to eliminate. The mud dauber nests are easily removed by scraping the mud nest away from the side of the house.

Taking on hornets and wasps alone can be tricky. We remove hornet nests using greener pesticides manufactured specifically to kill these pests.