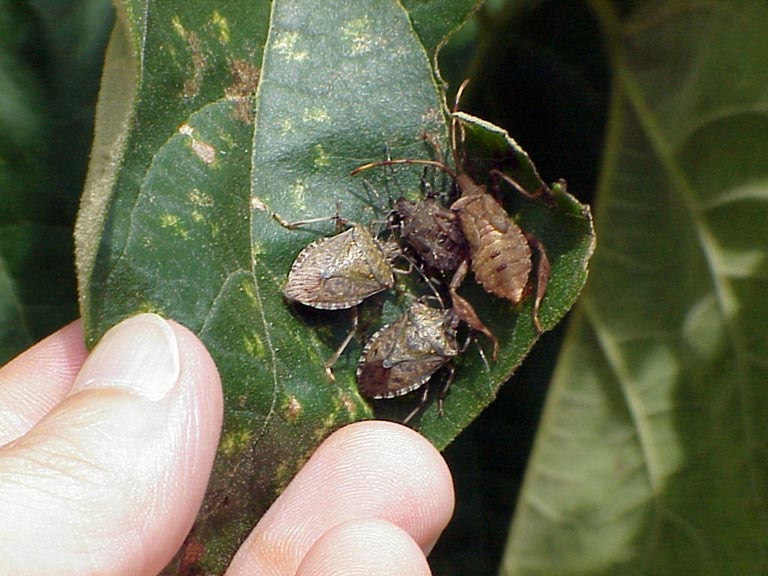 Invaders of the Buggy Kind

Spring has arrived in Maryland, and with it the inevitable appearance of a wide array of insects around and inside the home. Most of the insects homeowners encounter are native to Maryland and easily recognized by locals, but in recent years the area has experienced the rise of several invasive species that can be hard to identify. Accordingly, I’d like to provide some information about two notable seasonal pests in Maryland, new to our area.

Native to Asia, the brown marmorated stinkbug is believed to have stowed away in shipping containers into the United States during the 1990s. The pests have become highly invasive and costly to farmers and fruit growers. The stinkbugs feed on crops, fruit trees, vegetables and ornamental plants.

Homeowners in Maryland often notice the bugs inside the home, or on landscape plants. During the fall, it is not uncommon for large numbers of brown marmorated stinkbugs to start invading houses and other structures to avoid the cold weather.  The migration trigger date in Maryland is September 22.  The bugs often congregate in attics, behind furniture or in structural cracks. The stinkbugs do not bite, but when squished produce a stinky odor.

The bugs can usually begin to be spotted during the spring months, and by fall have become a common sight. In June to August, the females lay clusters of cylindrical eggs on the undersides of leaves. The females can produce two or more batches of offspring during the warm months.

Exterior treatment of your home can be scheduled with our pest control professionals in the early fall as this is the best time to control the brown marmorated stinkbug. Homeowners should also rake any debris or leaf mulch away from the home’s exterior where the bugs may be hiding. Caulking and sealing up any cracks around the foundation, windows and other access areas will also help prevent the stinkbugs from gaining entry into the home. 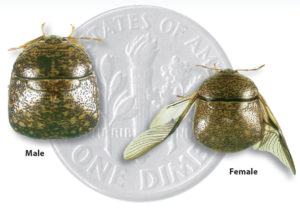 The kudzu bug arrived in the Unites States in 2009 on a plane from Asia to Atlanta, GA. Since 2009, the population of this invasive species have spread throughout the north and west. Adults are 3.5 to 6 mm long, oblong, olive-green colored with br

own speckles. Similar to the stinkbug and often misinterpreted as such, they produce a mildly offensive odor when disturbed. They can also leave a stain when crushed.

They differ from the stinkbug and other plate bugs in that the plate in the center of their back is broader along the bottom. They are much wider than they are long. The kudzu bug has a round body shape rather than a triangular, semi-elliptical shape like stink bugs.

The kudzu bug is named after its favorite food source, the kudzu root. The root is an invasive species in the US and the arrival of the kudzu bug may control the spread of the plant. Unfortunately, the bug also prefers the taste of crop plants such as soybeans and has had a negative economic impact on the crop. It is a strong flier and an efficient hitchhiker which explains why it has spread so quickly.

Controling the Kudzu in and around your home.

Bugproof the outside and have your vacuum at the ready.

The kudzu bug is a nuisance to homeowners two times each year: early spring (March) and the fall (mid-October through late November). Here are some suggested measures to protect your home from this stinky invader.

According to kudzubug.org, the Kudzu bug has been reported in parts of Southern Maryland in Montgomery, Anne Arundel, Talbot, Sussex, Charles and St. Marys counties. You can see how the Kudzu has invaded the southern part of the US on this map

Eco Care is a family-owned pest-control company. Eco Care owner Erich Grove, a board-certified entomologist, uses science to get insects and other pests under control in Howard County and surrounding areas of Maryland and that means you have science on your side. If stinkbugs and kudzu bugs are troubling you and your home, give us a call. If you spot the Kudzu bug, snap a pic and send it to us