Fireflies and Bugs that Glow 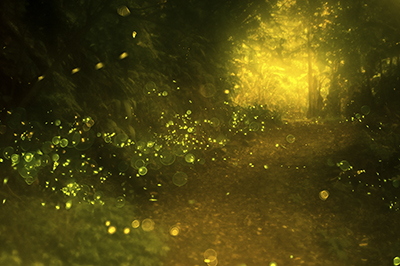 Fireflies and Bugs That Glow

Sparks dancing in the night sky, fireflies are appealing in ways that few other insects are. To find out all about fireflies, read on.

Fireflies and lightning bugs are the same thing, and they’re named wrong, no matter what we call them. They’re insects, not worms, and they’re beetles, not flies. The name glowworm is also confusing, because firefly larvae and female fireflies that look like larvae are called glowworms, but there’s also a distinct species called the glowworm beetle.

Signaling With Their Taillights

It’s the fireflies’ rear ends that glow, but the light still helps guide their flight paths. A male flashes his lights, and an available female flashes hers in response, helping the male find her. The light may also warn predators that these summer insects taste bad, a theory supported by the fact that the larvae and sometimes even the eggs glow.

Summer is mating season, and it takes just a few weeks before the eggs hatch. Once hatched, the larvae eat worms, snails and slugs before hibernating through the winter. When spring comes around, they pupate and turn into adults. Scientists aren’t completely sure what the adults eat. They may eat pollen and nectar. They may also die so soon after reproduction that they don’t need to eat during their brief adulthood.

Fireflies create light through a chemical process. An enzyme called luciferase causes another chemical, luciferin, to oxidize and glow. The light is usually yellow or green, with some uncommon species able to produce red light, as well. Unlike light bulbs, which waste 90 percent of their energy as heat, the bioluminescence of fireflies is extremely efficient, with no heat loss at all.

There are other glowing insects, but we’re not likely to spot them in Maryland. A glowing cockroach that lives only in a volcano in Ecuador was discovered in the 1930s and may already be extinct.

Firefly populations in the United States are decreasing, partly due to loss of the wetlands they prefer and partly due to artificial light at night interfering with their reproductive processes. Populations don’t rise to a level that causes problems for people, so we don’t need pest control to contain them. Instead, we can just sit back and enjoy the nightly light show.

Enjoying the evening skyline of fireflies this summer?

Have a question about a bug, insect or pest. ASK ERICH!