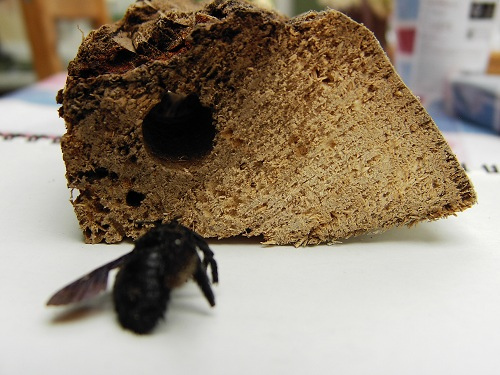 Homeowners often notice 1/2 inch holes in their homes, facia boards, decks, railings and outbuildings before they see the carpenter bees that constructed the caverns. Carpenter bees measure approximately 1/2 to 1 inch in length, and their appearance closely resembles that of the average bumble bee. However, the carpenter bee lacks the fur on his abdomen that the bumble bee sports. Here are a few things you should know about carpenter bees in case you start seeing holes in your home. 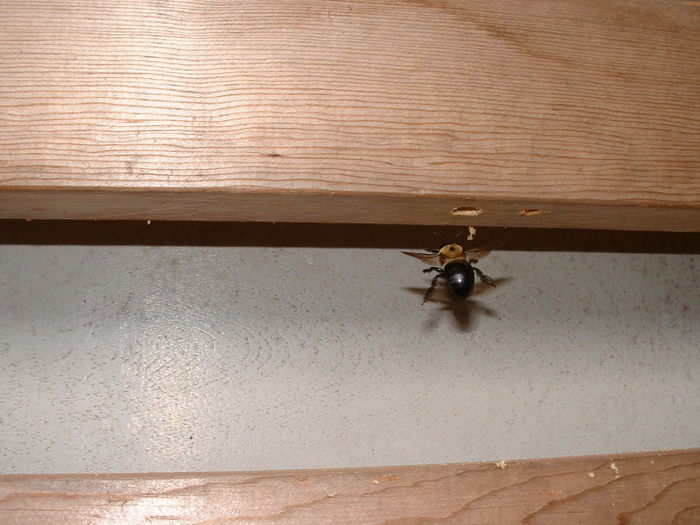 The female carpenter bee creates the first hole in a piece of unpainted or untreated wood in April or May to lay her eggs. She does not eat the wood — she simply tunnels through the wood, pushing the chewed up sawdust out the entrance hole, which is why people frequently see small piles of sawdust on the ground below carpenter bee holes. Inside the hole, the female will make a long tunnel with several caverns to lay her eggs. Solitary bees, the queens construct their own private galleries for their eggs. If the holes are not repaired or plugged up each year, new females will continue returning to the nesting sites every spring to enlarge the chambers in the holes and lay more eggs. Each year, upon returning, the female will make her tunnel and caverns bigger. The University of Maryland notes that carpenter bee nesting tunnels have been discovered that measure up to 10 feet in length.  The most noticeable damage is done later in the summer when woodpeckers rip the wood open to pluck the bee larvae from the galleries.

Stocking the Nest and Laying Eggs

When the female carpenter bee finishes the nest, she’ll begin making what is known as bee bread to stock the nest. Bee bread is a combination of pollen and nectar that the female has gathered to feed her hatching young. She will create one cavern, lay down the bee bread, place one of her eggs on top of the bee bread, seal the cavern and move on to the next cavern to repeat the process until all of her eggs are laid. The female then leaves her nest and the male carpenter bee will patrol the entrance to the nest to drive away any intruders. He acts extremely aggressive but has no stinger or defense mechanism. He will simply swarm at people, other insects and animals in an attempt to drive them away from the nest site. 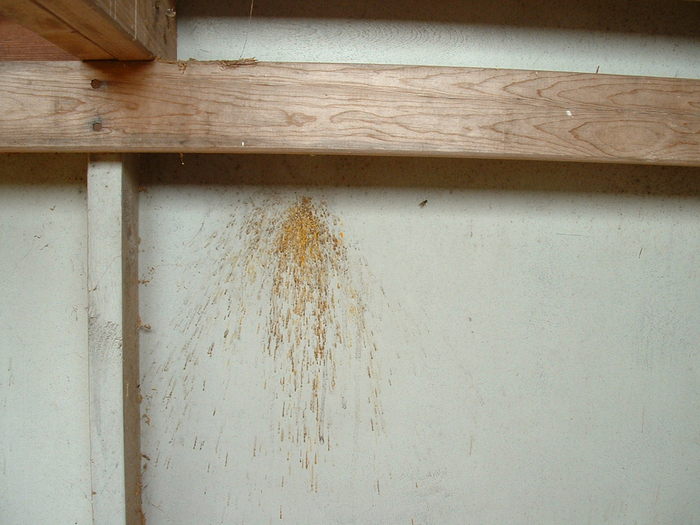 Hatching and Leaving the Nest

During the summer months, the eggs will hatch and the young will feed on the bee bread until they’re grown. The bee will emerge from the tunnel late in the summer when it’s fully grown. During Maryland’s harsh winters, it is not uncommon for the bees to return to the tunnels to avoid the cold.

You can prevent carpenter bees from tunneling into your wood by keeping all surfaces painted and sealing up any holes that appear. Pressure treated, painted and chemically treated wood are unattractive to the carpenter bees.  In areas where that is not possible, a preventative treatment done during the spring can be made.